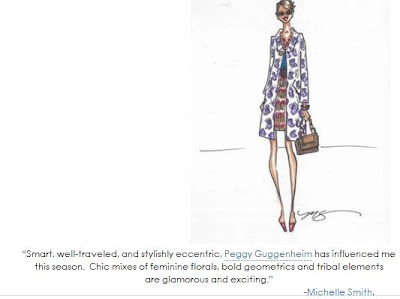 Have you heard of the design house Milly? Milly is sold at fine department stores like Bloomingdale's. The label  is the adorable feminine brainchild of designer Michelle Smith. The super stylish Michelle worked at Paris fashion houses Hermès and Dior.  I've long been a fan of Milly.  Check out Milly designer Michelle Smith’s sketch and inspiration quote above along with a swatch of a featured print in the spring 2011 collection, which will debut on the runway on Wednesday, September 15 at The Stage at Lincoln Center.  Michelle says she is inspired by the fashion eccentric Peggy Guggenheim.  Peggy G was an heiress and the ultimate art lover, collecting  fine art and offering patronage to some great artists. Amy Madigan  played the part of  Peggy in the movie Pollock (2000),  based on the life of  artist Jackson Pollock.

Below is a swatch from the collection, showing a poppy print. Love it!

Pictured: A swatch from one of Milly's prints for her Spring 2011 collection.
Posted by Unknown at 8:06 AM