Tomorrow, June 28th,  online shopping club Billion Dollar Babes is offering a collection of Chanel handbags for sale.  I will be logging in early to get it a look at see if the prices are indeed Coco friendly.   Since the club is invite only, you can use my invite to join. Invite: Billion Dollar Babes Shopping Club

Note that this is my personal invite link, so I receive a referral fee if you join and purchase.  If you join without purchasing, I don't receive any referral. I am listing this because Chanel is pricey as all chic bargainistas know, so this is just a way to pass on what may or may not be a good deal.  We won't know until tomorrow when we see the prices and the condition of the bags.  So, I am not here urging you to buy so I can make some $$$.  I am listing this, and saying, you might want to check it out and see if the sale truly delivers good prices on Chanel.  Only you can decide if the sale is worthwhile once you examine the pictures and the prices.
If you're reading from Los Angeles, click here to learn about a live sale Billion Dollar Babes is having June 29th and 30th featuring designers including Chanel.

Bonne Chance!
Posted by Unknown at 11:42 PM No comments:

Endless.com & Polyvore Team up for a Contest. Create your Street Style to Enter to Win 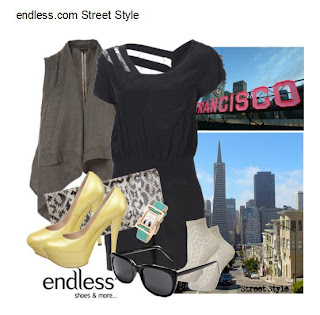 Endless.com has teamed up with Polyvore to launch the Street Style with Endless contest.  Kicking-off at midnight tonight (6/21) fashionistas coast to coast create a set that shows of their personal style.  The top three will be chosen by the endless Design team and will win an Endless.com Gift Card for up to $500; with their winning look featured on the Endless.com Facebook page. Use the Polyvore style boards to show off your street style--you have to have the right shoes and accessorie?. Do you glam it up with oversized sunglasses in LA, represent NYC with a pair of Dolce Vita's, or sling a hobo bag over your shoulder in SF? No matter what your city's street style is, endless.com provides the hottest selection of shoes, handbags, watches, and sunglasses.  Click here to enter.

endless Street Style
What's the rage in your city this summer? Create a set that shows your personal street style! Make sure all shoes, bags, and accessories featured are from endless.com. The top three will be chosen by the endless Design Team, win $500, $300, and $200 gift cards, and be featured on the endless.com Facebook page!
To help you get started, check out these products from endless.com:

Posted by Unknown at 6:48 PM No comments:

Frugal Fe$t Summer Swap
Co-hosted by The Swapaholics & Bargain Babe
Saturday, June 19th 2010
10 a.m. to 3 p.m.
North Hollywood Performing Arts Center
Green is the new black, and swapping is the new shopping! The Swapaholics know best, having recently been featured for their "swappertise" by USA Today, The Boston Globe, US News & World Report and all the major network TV stations. And they're coming to LA to host their first-ever West Coast clothing swap THIS SATURDAY, June 19th, with Julia Scott of BargainBabe.com at the North Hollywood Performing Arts Center. They'll be swapping women's clothes, men's clothes, kids clothes, books, CDs, DVDs, and home decor. DJ Andie Cassette will be dropping beats & they'll have some sweet swag & raffle prizes (spa gift certificates, iPods) to give away to lucky attendees. The best part? Tickets are only $5-$15 bucks, and our 25 VIP ticket-holders ($15 each) will walk away with a reusable swap bag FULL of swag from our sponsors. (Regular tickets are just $5 if you bring items to swap, and still only $10 if you come empty-handed.)
How it Works:
More on The Swapaholics
RSVP & tickets at GoldStar.com:
Posted by Unknown at 3:22 PM No comments:

Email ThisBlogThis!Share to TwitterShare to FacebookShare to Pinterest
Labels: bargain babe, swapping not shopping, the swapaholics 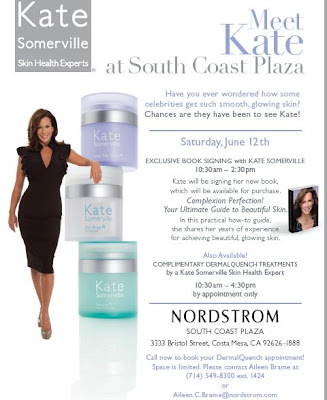 Kate Somerville will be appearing at Nordstrom South Coast Plaza for the Summer Beauty Trend Show at 8 am.  Yes, it's early! :) If you want to see her bring a coffee thermos with you or some Starbucks to go. You are invited to hear the trends of the summer from one of Hollywood’s leading skin health experts.  Nordstrom’s Cosmetic Trend Show is from 8 to 10 a.m. Tickets are $15 and are redeemable for $15 toward a cosmetics purchase. Receive a free gift for attending, while supplies last.


After the Trend Show, Kate will be signing her new book, Complexion Perfection! Your Ultimate Guide to Beautiful Skin from 10:30 am-2:30 pm.  Kate Somerville Skin Health Experts will be offering customers personal consultations and complimentary DermalQuench treatments from 10:30 am-4:30 pm.
If you're in Southern California or the OC, this might be a good way to get some free treatments and tips on Saturday.  Here's the lowdown on all the Beauty Stuff happening at the OC Nordies on Sat, June 12:

Meet Celebrity and Fashion Manicurist Deborah Lippmann
Saturday, June 12, 10:00 AM - 4:00 PM
Deborah is owner and creator of Lippmann Collection, which is an elegant line of long wearing nail lacquers and treatment product. Following the Cosmetic Trend Show Deborah will be on the cosmetic floor where she’ll be showing her latest color collection, as well as doing brief one-on-one consultations recommending colors and products based on your needs.
Cosmetics
Posted by Unknown at 12:20 AM No comments:

The Art of Film Fashion: An Interview with Costume Designer Antoinette Messam One of the great aspects of the film business is costume design.  Designing for film is very different than designing for the runway.  The inspiration for the designs must always comes from the story, the director and the setting rather than the designer's own vision alone.  Recently, we were granted an interview with well know costume designer Antoinette Messam.  In case you haven't heard of Antoinette, she has been a key figure in fashion for close to 20 years. Antoinette is well recognized as a Fashion Designer as well as a stylist and costume designer and has her own line of easy to wear, elegant and sexy clothing called iStyle. Her work in costume design spans the last fifteen years and almost 40 motion pictures.

Some of her recent work includes Crimes of Fashion and The Orphan; and she just finished the romantic comedy “Love, Wedding, Marriage” starring Mandy Moore, Kellan Lutz, Jessica Szhor, Jane Seymour and James Brolin as well as rising star Richard Reid. Love, Wedding, Marriage, is about to open this summer. The movie is about a happy newlywed marriage counselor’s views on wedded bliss which get thrown for a loop when she finds out her parents are getting divorced. The film is being directed by Dermot Mulroney. Babe alert on Dermot, wish he was in front of the camera, not behind it. :)

A:  The mandate from Producers for this film was that they wanted it to look like the Diane Keaton/Jack Nicholson movie "Something's Gotta Give". A pretty movie with pretty people in pretty clothes.

They should have told the Director, DOP and myself because we tried to give a new take on a romantic comedy with a little more edge, less pretty colors as compared to real colors. I hope it worked.

I just tried to have my characters/cast look like they were wearing their own clothes. Mandy/Ava was very relaxed and had a uniform for work that was contemporary and young, with her go to blazer thrown on for the clients and sexy as hell when not working.  Kellan/Charlie was a young executive who I wanted to look relaxed and effortless in his very classic "Calvin Klein" collection.

Q:  What was your favorite part of the costume design for “Love Wedding Marriage”?

A:  My favorites were Bradley/James Brolin who wanted nothing more then to not look like James Brolin. He took every suggestion and broke it down to another level which I thought was great.  Jessica Szohr wanted a new look from her "Gossip Girl" character so we just went for it and hoped when we showed up for set everyday she would not be sent back to put on more clothes. Less is more was our motto.

Last but not least my experience with Jane Seymour started at her home going through her many closets which were archived by shows and Designers. I was honored and moved that she shared her collection of vintage Azzidine Alia's, Patrick Kelly (who I had met before he died) and gown upon gown from Escada. We wanted to have Jane, break out of the Mom, wife mould and have a little fun with color and style without looking like she was trying too hard.
Posted by Unknown at 7:59 AM No comments: