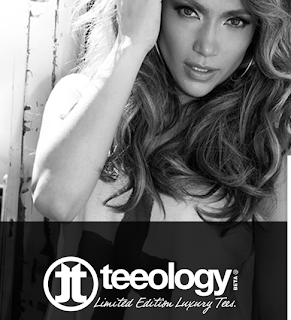 She may be leaving American Idol, but Jennifer Lopez clearly has other things she is working on. One of them is a newly announced T-shirt site called Teeology. So what's this all about?  It sounds like crowd sourcing plus affordable fashion. The value proposition is that the site will gives its members the ultimate power to decide which designs are produced and sold. “We saw a huge opportunity to jump into the luxury tee market by offering the same high-quality product you can buy at a Nordstrom or Bloomingdales, but for a fraction of the price,” says Eng, Teeology’s Co-Founder and CEO.  “Because of our voting/pre-order mechanism, focus on social buzz, and limited-edition runs, Teeology isn’t saddled with a huge inventory and excess merchandise. By rethinking the traditional retail model that can often require a 3-6 month lead time on production we are able to remain nimble and on trend.”

Honestly, the idea reminds me of T-Shirt site Threadless.  With Teeology, designers will submit designs to be reviewed by Teeology’s curators (like Lopez), who come up with bi-weekly themes to guide the process and then select the best designs to go up for vote.  Teeology members then vote for their favorites and share them on their social networking channels to ultimately choose the tees that get produced in limited runs and sold in Teeology’s online store. The brains behind this start up obviously hope that social media influencers, Tweeps and Facebook fans will fuel this site.  I'll be interested to see how this does.  If J.Lo wasn't shilling it, I think it would fly under the radar, especially since Threadless has already built a strong community and established itself.
Posted by Unknown at 11:01 PM