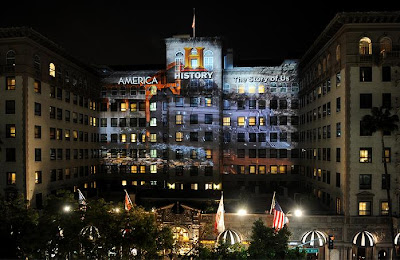 Pictured: The History Channel's "America, The Story of Us" campaign is projected onto the front of The Beverly Wilshire Hotel on April 17th, 2010 in Beverly Hills, California. (Photo by Kevin Parry/Getty Images)
If you're looking for unique things to do in Los Angeles this week, you might want to check out the Public Art Light Installation by ArtLumiere that will be shown on the facade of the Beverly Wilshire Hotel in Los Angeles. From April 19 - 25, passersby on Rodeo Drive will be treated to a series of projections of American History on the hotel's exterior from Dusk to 11:00 pm. The light show is expected to continuously run in loops of 6 minutes. Above is a sneak peak at what the grand old Beverly Wilshire will look like this week.

The public art event will celebrate America's past and promote AMERICA THE STORY OF US, an epic 12-hour television event spanning 400 years of American history. The show will premiere on HISTORY on Sunday, April 25, 9pm ET/PT with new episodes airing on Sundays through Memorial Day. The light display will be viewable in front of the Beverly Wilshire Hotel each evening beginning at sundown until the April 25 television premiere.

The historical images were hand painted by ArtLumiere. The images are designed to be vibrant and clear, giving the impression the building has been painted with scenes from American history. The advanced projection technology used to create the effect was invented and used exclusively by ArtLumiere, a New York-based company created by French-born artist Lucette de Rugy.

In addition to Los Angeles, similar light projections will display this week in Washington DC at Union Station and in New York City at Grand Central station. If you're interested in viewing the Los Angeles light show, the best views maybe from across the street at the restaurants on Two Rodeo like McCormick & Schmick's and 208 Rodeo. The light show is free and open to the public. Combine the free show with one of the Happy Hour deals from the Two Rodeo restaurants and you have an affordable and arty evening out.
Posted by Unknown at 9:21 PM

Email ThisBlogThis!Share to TwitterShare to FacebookShare to Pinterest
Labels: Beverly Wilshire Hotel, he History Channel's "America, The Story of Us" campaign