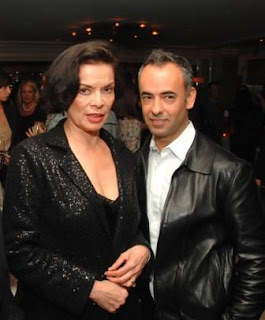 Pictured:  Bianca Jagger and Francisco Costa at the WWD Book Party last week at Bergdorf Goodman in New York.  (photo: Patrick McMullen)
Last week Women’s Wear Daily, (WWD) hosted a book party entitled: 100 Years, 100 Designers at Bergdorf Goodman in New York City. Executive Editor, Bridget Foley hosted the  launch for WWD: 100 Years, 100 Designers.  As indicated by its name, this is a commemorative book for the 100 year anniversary at Bergdorf Goodman. "100 Years, 100 Designers" pays homage to a century of WWD news and coverage, and 100 designers who have who have each left an indelible mark on the history of fashion and style.  The designers recognized in the book are among the most influential style icons and taste makers of our time.  The book is filled with hundreds of stunning photographs, lavish illustrations and also acknowledges the photographers, editors and illustrators who have made invaluable contributions to WWD for the past 100 years.  Some of my favorite designers, Norma Kamali, John Bartlett and Vera Wang, were on hand for the launch.  Also on hand, one of my favorite style icons, Bianca Jagger.  Bianca looked amazing ( and real)  as you can see from the picture!

Way, way before Twitter and the Blogs, the fashion feet on the street, and the voice heard around the world was Women's Wear Daily. I'm so glad to see a beautiful book like this on the market to celebrate the anniversary,
Posted by Unknown at 8:24 PM